As business becomes progressively more global, we’re having to standardise the way we exchange information.

Business transactions and payments are one of those things.

Where online payments are concerned, data is being transferred from company to company and system to system. Computers need to be able to translate this data and make sense of it so it can perform the function it is meant to, as quickly as it can.

Messaging standards eliminate the need for human intervention to interpret data. To do this for payments, the financial industry need to agree on how to organise the data by formats (syntax) and meaning (semantics). The ISO 20022 standard shares details on the following:

The ISO 20022 standards is being adopted by Clearing House Automated Payment System (CHAPS), Faster payments and Bacs in order to cover £90 trillion worth of transactions and 8 billion payments a year.

Andrew Hauser, Executive Director at the Bank of England said:

“The coordinated adoption of a single standard across UK payment systems should bring many benefits for payment providers, and for the businesses and households they serve. Risk will be reduced by allowing payments to be rerouted more effectively between systems, and by standardising and improving data supporting detection of fraud and financial crime. Payments will flow more easily across international borders.”

What are the Challenges with Payment Messaging Today?

The problem associated with syntax is that within different geographies, industries and organisations, there exists different standards. This creates a problem when you want to create a seamless end-to-end experience.

The problem with semantics is that some geographies or industries or boundaries use a different word to denote the same meaning. Take payor, for example. Some use the term payor, payment originator, initiator etc.

The benefits of having a standardised data format for the payments industry are:

Here’s an example of an XML credit transfer: 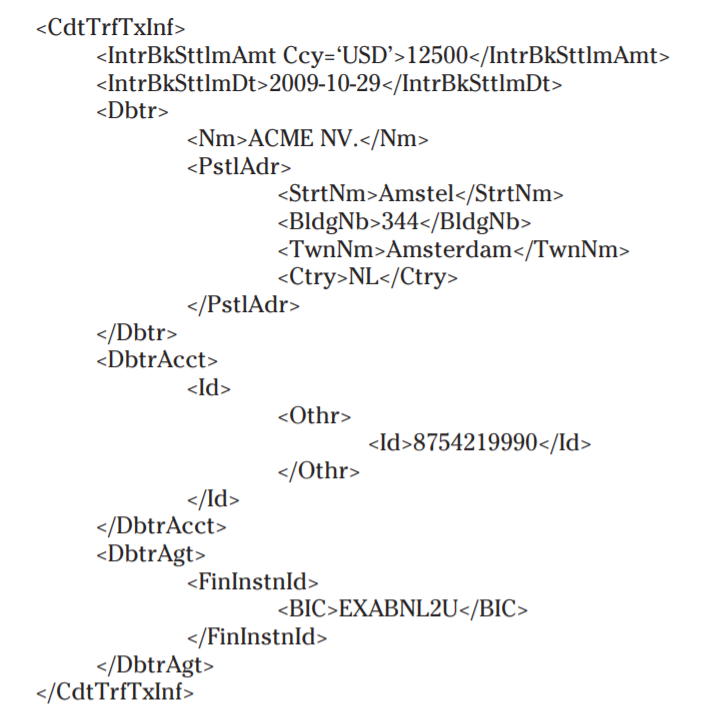 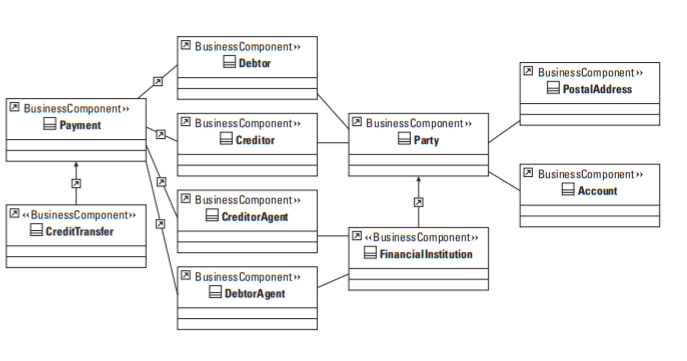 A logical message is the description of all the information (elements) that is needed to perform an activity or process (component). These images represent the entire transaction.

In short, these two images show two parts of the ISO 20022 framework. The first is outlining the business process or activity (in this case, a credit transfer). This is broken down into business components and business elements. A component like a “debtor” would have elements associated with it, such as name and address. The component “payment” may contain elements such as currency, amount, execution date, settlement date. The payment itself is central. It is undertaken by two financial institutions and two parties whom have elements such as address and name associated with them. These parties may own an account which leaves further elements

The benefit of this formatting is that you can reuse elements again and again for different processes in a computer system. All of this information is contained in the ISO 20022 dictionary.

The current edition of the ISO 20022 standard includes eight parts, published in May 2013:

The ISO 20022 repository holds around 750 business components and more than 400 message definitions.

We’ve touched on the benefits already at the start of this blog but now you know more about this messaging standard, I thought I’d elaborate a bit on the benefits.

As I’ve already said: the benefits of having a standardised data format for the payments industry are:

Having defined business processes with elements laid out clearly has great benefits in creating an easy to understand language that computers and humans can understand. Using XML to deliver this also has benefits in that it enables easy manipulation by modern software and it’s easily understood by most software.

XML is another international open standard so it doesn’t require developers to learn anything that isn’t already supported across the industry. Being an open standard also means that there are a wide range of tools available for editing, document management, validation and more.

Another major benefit of ISO 20022 is interoperability across technology and platforms. Consider a financial institution conducting a transaction and having to translate the same element to different fields in each.

ISO 20022 adoption is gaining traction as regulations start to adopt it. At the moment you can see it in use for forex trading, payments, funds and securities, and more.

A big driver for the adoption of ISO 20022 in the payments arena is SEPA (Single Euro Payments Area) which is currently replacing domestic retail credit transfers and direct debits with European payments that use this ISO standard.

Other systems such as real-time gross settlements (RTGS) are adopting or aligning to this standard.

Recent years have shown a demand for foreign investments which require markets to be able to facilitate these needs. Both existing and new markets have to decide how they’re going to take in and translate this new information. ISO 20022 is a solution to that.

Both payment terminal (POI) and ATM transactions are being covered by ISO 20022 since 2010.

Another one for the paperless transaction environment. E-invoicing, demand guarantees, standby letters of credit and more are being translated into ISO 20022 messages to help banks meet supply chain challenges and to provide enhanced financing services for the consumer.

Legal Entity Identifiers are a standardised way to identify a legal entity. Having one is required if you want to comply with regulations like MiFID II and they’re primarily used to help create a transparent trade reporting process where companies and their hierarchies can be identified.

The solution was created as a response to the 2008 financial crash. LEIs are available on an open database and managed by the Global Legal Entity Identifier foundation or GLEIF.

Dave Ramsden, the Bank of England’s Deputy Governor for Markets and Banking spoke at the ISO 20022 conference in December 2018 championing the use of LEIs both in the financial services industry and across all sectors of the economy.

The ISO 20022 standard was updated in 2016 to include the ability to verify financial institutions using an LEI code instead of a BIC. BICs are primarily bank codes and LEIs can be obtained by any company wishing to trade on the financial market.

This addition allows a much broader range of companies (e.g. FinTech) to standardise their payment messaging in line with the ISO 20022. It also allows companies to speed up current Know Your Customer requirements that are often too costly and ineffective.

We can’t get away from the fact that transactions are becoming more globalised and the world needs a standardised way of sending messages so that transactions can be seamless, faster, cheaper and interoperable with other systems.

We’re also trying to ditch the paper and save money by keeping transactions online. But none of this could be possible without good identity verification techniques like those provided by Legal Entity Identifiers.

We look forward to the future of online transactions.

In the meantime, if you’d like to talk more about the use of Legal Entity Identifiers, contact ManagedLEI today or to buy an LEI, visit our shop. 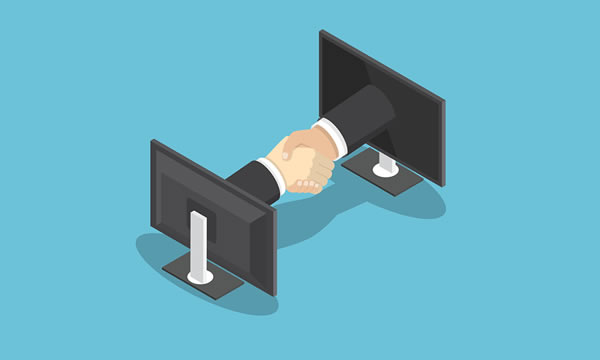 The Importance of Trust in Online Business Transactions

Why is trust so important in digital transactions? And how do we increase trust in digital commerce? Digital identity is key.
Read more 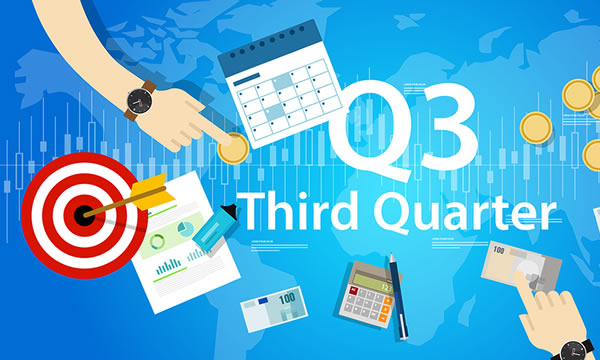 Insights from the GLEIF Q3 2020 Report

With 1.65 million Legal Entity Identifiers now issued, we take a look at some of the insights from the GLIEF quarterly LEI business report.
Read more 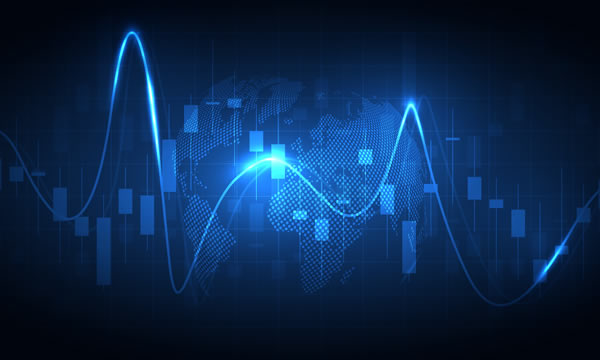 What is trade finance and how can it help support a post-pandemic recovery? A recent report sheds light on this very question.
Read more